Karpman’s dramatic triangle in the workplace and in the community – how to avoid it?

Have you ever heard of Karpman’s Drama Triangle? Do you know people who give more than they can get? Or do you feel like a “Savior” yourself? The Savior is one of the three key roles in the Drama Triangle, which is a concept that illustrates the roles people assume. It not only affects family relationships or between friends, but such a psychological game is also noticeable in the sphere of work. What is the Karpman Drama Triangle and how to avoid it in the workplace and in the community?

What is the Drama Triangle?

The creator of the drama triangle is Stephen Karpman. The purpose of his concept is to reflect on one of the ways people play roles in relationships. Initially, the drama triangle was designed to discuss personal relationships, but it can also be used to describe relationships in the workplace. The three key roles described by Karpman are: Savior, Persecutor, and Victim. Moving around the constructed triangle consists in alternately entering each of its three roles. 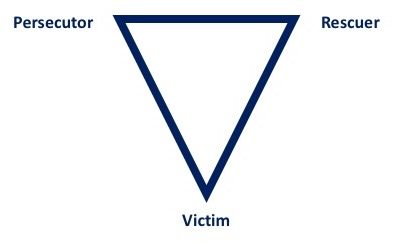 The persecutor in the drama triangle is self-centered and acts in such a way as to benefit himself first and foremost. We distinguish here an Active Stalker, who deliberately fulfills his needs at the expense of others, and a Passive Stalker, who reduces the importance of other people through various types of neglect. There is also a Retaliatory Persecutor who intends to punish someone. The persecutor in the drama triangle builds his position by persecuting, attacking, humiliating and belittling other people.

The victim is the most passive person in the drama triangle who very often starts just getting into it. She has no problem-solving skills, she even hopes that someone will solve the problem for her. She herself does not believe in any of her abilities. The victim is very easily subject to reality and often loudly manifests his grievances, arousing guilt in other people. The victim’s suffering is real or potential. She has a tendency to enter into and persist in difficult relationships with other people, even violent people, and to believe that she cannot be happy until someone else does something, changes (e.g., stops drinking).

Workplace victim – A victim may be someone who constantly complains about their boss, how hard it is to get along with them, or how many responsibilities they have to take on. He sees only negatives and cannot solve the problem.

Do you know people who put the needs of other people above their own needs? It is these people who fall into the role of the Savior who is prone to sacrifice in the dramatic triangle. The Savior saves others to uplift themselves, although they are often genuinely concerned about the Victim’s situation. It is this role in the drama triangle that is responsible for solving problems, which the Victim cannot do. The rescuer often relieves others in various situations, makes decisions for other people, sometimes gives orders. In this way, he proves the victim helplessness and inefficiency, and thus – makes her dependent on himself.

AVOID TRIANGLES! – OR HOW TO DO IT IN PRACTICE?

Karpman’s dramatic triangle has a huge impact on relationships and carries a lot of dangers. Can you recall times when someone was reminding you of a favor you have done? Or when you made a sacrifice for a cause and it was not appreciated in any way? Perhaps you yourself were caught up in a drama triangle at that time, or maybe someone tried to draw you into it.

Getting out of the drama triangle is not an easy matter, because rarely does anyone realize that they have entered the pattern – persecutor – victim – savior, taking on alternating roles.

The first step to get out of the triangle is to realize that you are in it and what role you currently play in order to be able to choose the best solution for you.

Stalker – In order for the Persecutor to stop being an executioner and leave the dramatic triangle, it is necessary for him to develop assertiveness, which also aims to achieve his needs and goals, but not at the expense of others. At work, it means starting to talk openly about your needs, say no when you don’t agree to something, negotiate different solutions with the rest of the team.

Victim – The key to Victim successfully leaving the Drama Triangle is learning how to solve problems and ask for help (and look for alternatives in case someone refuses to do so). In the workplace, brainstorming is a good solution, which makes it easier to gather ideas and find the best solution together. It is also important for the Victim to consult their own emotions in order to learn to control them.

The Savior – In order for the Savior to be able to leave the drama triangle, he should learn to avoid helping each time, even if the Victim could make a decision or solve a problem for herself. In a healthy relationship, the help provided is reciprocated, and in the described triangle it comes from only one of the parties, the Savior. The savior has to set the limits of the support provided, i.e. not to do it when he or she does not want to, invite them to solve the problem themselves, not to help directly, but to offer a solution to a given problem.

Sometimes people are so caught up in the drama triangle that they are unable to leave it on their own. In this case, a psychotherapist or a coach may help. Do you feel that you are duplicating the patterns of the dramatic triangle in your professional life? Are you not very assertive towards the boss, do you perform more duties than the rest of the team, thus allowing for exploitation, or maybe you want to achieve professional goals at all costs, not paying attention to the needs of other people? Perhaps you are duplicating the role models described here not only in your professional but also private life. In order to successfully leave this psychological game, it is necessary to look inside yourself and realize when such situations have occurred – it is possible that you have entered into such relationships with other people since childhood.